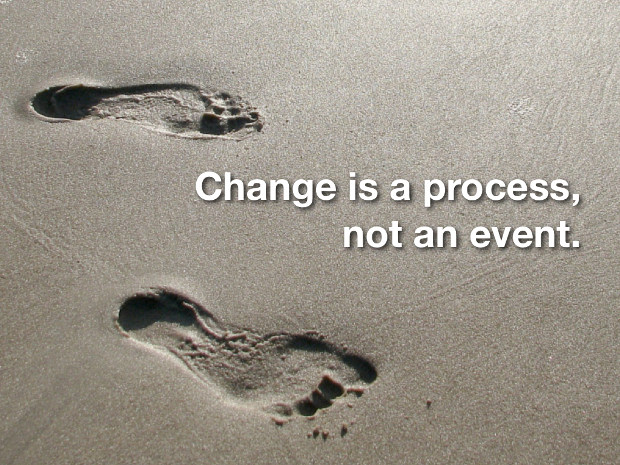 Changing Company Culture Requires a Movement, Not a Mandate

For organizations seeking to become more adaptive and innovative, culture change is often the most challenging part of the transformation. Innovation demands new behaviors from leaders and employees that are often antithetical to corporate cultures, which are historically focused on operational excellence and efficiency.

But culture change can’t be achieved through top-down mandate. It lives in the collective hearts and habits of people and their shared perception of “how things are done around here.” Someone with authority can demand compliance, but they can’t dictate optimism, trust, conviction, or creativity.

At IDEO, we believe that the most significant change often comes through social movements, and that despite the differences between private enterprises and society, leaders can learn from how these initiators engage and mobilize the masses to institutionalize new societal norms.

One leader who understands this well is G.V. Prasad, CEO of Dr. Reddy’s, a 33-year-old global pharmaceutical company headquartered in India that produces affordable generic medication. With the company’s more than seven distinct business units operating in 27 countries and more than 20,000 employees, decision making had grown more convoluted and branches of the organization had become misaligned. Over the years, Dr. Reddy’s had built in lots of procedures, and for many good reasons. But those procedures had also slowed the company down.

Prasad sought to evolve Dr. Reddy’s culture to be nimble, innovative, and patient-centered. He knew it required a journey to align and galvanize all employees. His leadership team began with a search for purpose. Over the course of several months, the Dr. Reddy’s team worked with IDEO to learn about the needs of everyone, from shop floor workers to scientists, external partners, and investors. Together they defined and distilled the purpose of the company, paring it down to four simple words that center on the patient: “Good health can’t wait.”

But instead of plastering this new slogan on motivational posters and repeating it in all-hands meetings, the leadership team began by quietly using it to start guiding their own decisions. The goal was to demonstrate this idea in action, not talk about it. Projects were selected across channels to highlight agility, innovation, and customer centricity. Product packaging was redesigned to be more user-friendly and increase adherence. The role of sales representatives in Russia was recast to act as knowledge hubs for physicians, since better physicians lead to healthier patients. A comprehensive internal data platform was developed to help Dr. Reddy’s employees be proactive with their customer requests and solve any problems in an agile way.

At this point it was time to more broadly share the stated purpose — first internally with all employees, and then externally with the world. At the internal launch event, Dr. Reddy’s employees learned about their purpose and were invited to be part of realizing it. Everyone was asked to make a personal promise about how they, in their current role, would contribute to “good health can’t wait.” The following day Dr. Reddy’s unveiled a new brand identity and website that publicly stated its purpose. Soon after, the company established two new “innovation studios” in Hyderabad and Mumbai to offer additional structural support to creativity within the company.

Prasad saw a change in the company culture right away:

After we introduced the idea of “good health can’t wait,” one of the scientists told me he developed a product in 15 days and broke every rule there was in the company. He was proudly stating that! Normally, just getting the raw materials would take him months, not to mention the rest of the process for making the medication. But he was acting on that urgency. And now he’s taking this lesson of being lean and applying it to all our procedures.

To draw parallels between the journey of Dr. Reddy’s and a movement, we need to better understand movements.

We often think of movements as starting with a call to action. But movement research suggests that they actually start with emotion — a diffuse dissatisfaction with the status quo and a broad sense that the current institutions and power structures of the society will not address the problem. This brewing discontent turns into a movement when a voice arises that provides a positive vision and a path forward that’s within the power of the crowd.

What’s more, social movements typically start small. They begin with a group of passionate enthusiasts who deliver a few modest wins. While these wins are small, they’re powerful in demonstrating efficacy to nonparticipants, and they help the movement gain steam. The movement really gathers force and scale once this group successfully co-opts existing networks and influencers. Eventually, in successful movements, leaders leverage their momentum and influence to institutionalize the change in the formal power structures and rules of society.

Practices for Leading a Cultural Movement

Leaders should not be too quick or simplistic in their translation of social movement dynamics into change management plans. That said, leaders can learn a lot from the practices of skillful movement makers.

Frame the issue. Successful leaders of movements are often masters of framing situations in terms that stir emotion and incite action. Framing can also apply social pressure to conform. For example, “Secondhand smoking kills. So shame on you for smoking around others.”

In terms of organizational culture change, simply explaining the need for change won’t cut it. Creating a sense of urgency is helpful, but can be short-lived. To harness people’s full, lasting commitment, they must feel a deep desire, and even responsibility, to change. A leader can do this by framing change within the organization’s purpose — the “why we exist” question. A good organizational purpose calls for the pursuit of greatness in service of others. It asks employees to be driven by more than personal gain. It gives meaning to work, conjures individual emotion, and incites collective action. Prasad framed Dr. Reddy’s transformation as the pursuit of “good health can’t wait.”

Demonstrate quick wins. Movement makers are very good at recognizing the power of celebrating small wins. Research has shown that demonstrating efficacy is one way that movements bring in people who are sympathetic but not yet mobilized to join.

When it comes to organizational culture change, leaders too often fall into the trap of declaring the culture shifts they hope to see. Instead, they need to spotlight examples of actions they hope to see more of within the culture. Sometimes, these examples already exist within the culture, but at a limited scale. Other times, they need to be created. When Prasad and his leadership team launched projects across key divisions, those projects served to demonstrate the efficacy of a nimble, innovative, and customer-centered way of working and of how pursuit of purpose could deliver outcomes the business cared about. Once these projects were far enough along, the Dr. Reddy’s leadership used them to help communicate their purpose and culture change ambitions.

Harness networks. Effective movement makers are extremely good at building coalitions, bridging disparate groups to form a larger and more diverse network that shares a common purpose. And effective movement makers know how to activate existing networks for their purposes. This was the case with the leaders of the 1960s civil rights movement, who recruited members through the strong community ties formed in churches. But recruiting new members to a cause is not the only way that movement makers leverage social networks. They also use social networks to spread ideas and broadcast their wins.

Leadership at Dr. Reddy’s did not hide in a back room and come up with their purpose. Over the course of several months, people from across the organization were engaged in the process. The approach was built on the belief that people are more apt to support what they have a stake in creating. And during the organization-wide launch event, Prasad invited all employees to make the purpose their own by defining how they personally would help deliver “good health can’t wait.”

Create safe havens. Movement makers are experts at creating or identifying spaces within which movement members can craft strategy and discuss tactics. Such spaces have included beauty shops in the Southern U.S. during the civil rights movement, Quaker work camps in the 1960s and 1970s, the Seneca Women’s Encampment of the 1980s and early 1990s. These are spaces where the rules of engagement and behaviors of activists are different from those of the dominant culture. They’re microcosms of what the movement hopes will become the future.

The dominant culture and structure of today’s organizations are perfectly designed to produce their current behaviors and outcomes, regardless of whether those outcomes are the ones you want. If your hope is for individuals to act differently, it helps to change their surrounding conditions to be more supportive of the new behaviors, particularly when they are antithetical to the dominant culture. Outposts and labs are often built as new environments that serve as a microcosm for change. Dr. Reddy’s established two innovation labs to explore the future of medicine and create a space where it’s easier for people to embrace new beliefs and perform new behaviors.

Embrace symbols. Movement makers are experts at constructing and deploying symbols and costumes that simultaneously create a feeling of solidarity and demarcate who they are and what they stand for to the outside world. Symbols and costumes of solidarity help define the boundary between “us” and “them” for movements. These symbols can be as simple as a T-shirt, bumper sticker, or button supporting a general cause, or as elaborate as the giant puppets we often see used in protest events.

Dr. Reddy’s linked its change in culture and purpose with a new corporate brand identity. Internally and externally, the act reinforced a message of unity and commitment. The entire company stands together in pursuit of this purpose.

The Challenge to Leadership

Unlike a movement maker, an enterprise leader is often in a position of authority. They can mandate changes to the organization — and at times they should. However, when it comes to culture change, they should do so sparingly. It’s easy to overuse one’s authority in the hopes of accelerating transformation.

It’s also easy for an enterprise leader to shy away from organizational friction. Harmony is generally a preferred state, after all. And the success of an organizational transition is often judged by its seamlessness.

In a movements-based approach to change, a moderate amount of friction is positive. A complete absence of friction probably means that little is actually changing. Look for the places where the movement faces resistance and experiences friction. They often indicate where the dominant organizational design and culture may need to evolve.

And remember that culture change only happens when people take action. So start there. While articulating a mission and changing company structures are important, it’s often a more successful approach to tackle those sorts of issues after you’ve been able to show people the change you want to see.